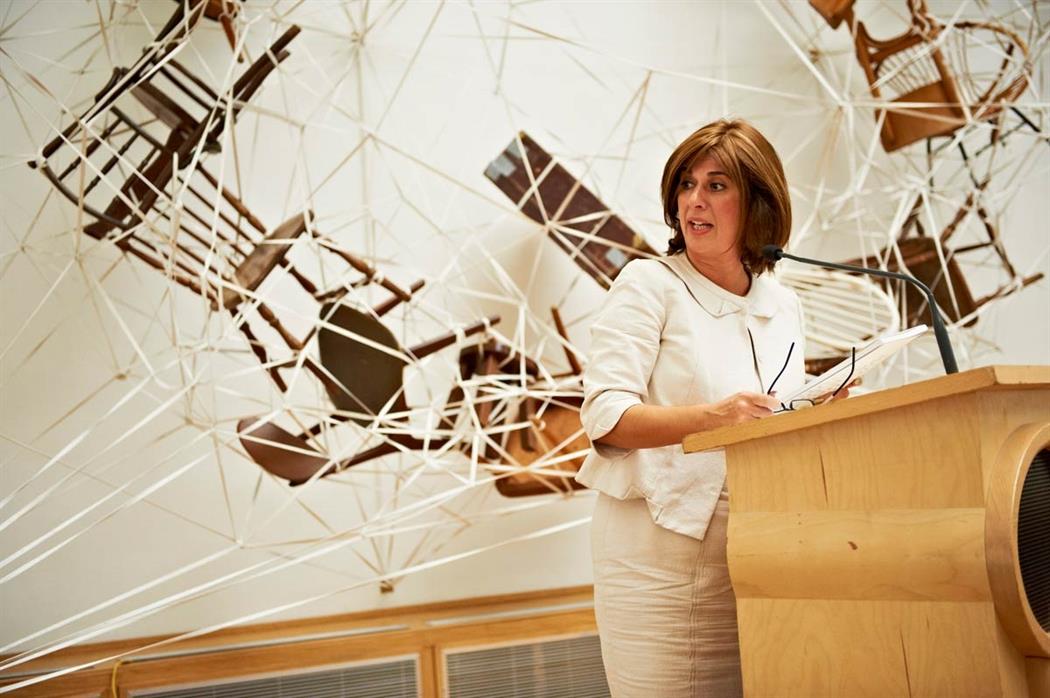 For her, plundered antiquities are fragments of the identity she has been violently torn away from. And every artwork she recovers is a piece of her own home, going back to its initial rightful place. This is what Tasoula Hadjitofi, founder of the “Walk of Truth” foundation, seated in the Hague, has confided to us. Her resolution for 2018 is to transfer her archives here in Cyprus and develop training programmes to combat the illegal trade of artworks – which will bring to the island experts from the Middle East, Europe and beyond.

A: It was an exciting year. I have travelled widely to promote my book, The Icon Hunter, published by Pegasus, USA, and have had the joy to present it at events in the U.S., the Netherlands, England and elsewhere. It is my own story – that of a refugee, a woman and an immigrant who defends her national, cultural and religious identity. By repatriating looted antiquities, she essentially fights her own pain at not being able to go back home to Famagusta herself.

How was the book received?

While I was promoting my book in the United States, I met with a lot of empathy, not just from the Cypriot diaspora but from immigrants of all nationalities. People who have become involuntarily disconnected from their roots understand that yearning to recover a piece of your identity, the yearning for a homeland that is now out of reach. Looted antiquities are small pieces of that identity, and every artefact I recover is a piece of my home restored to its rightful place.

What have you learned along this path?

A: I have often dwelled on questions of identity this year. Each of us has many identities: our national, religious and cultural identities but also our roles as parents, children or spouses – and so many other. Understanding our identity makes us feel safe and secure and gives us a sense of belonging to a community with a common or similar identity to our own. But at the same time that question of identity is also at the heart of almost every conflict facing us around the world. This year, we have witnessed extremism and violence by people who have

different faiths from those they target. In some cases, they even have the same faith as their victims; they just interpret it differently. The most frightening illustration of this religious intolerance is ISIS, which recruits some people born in Europe who are struggling with issues of identity and belonging; they are juggling dual nationalities, dual loyalties and dual identities. These vulnerable young people become a target for conversion to extremism.

Have you managed to find answers to all this?

Chasing looted antiquities around the world has helped me answer many of these questions for myself. Repatriating antiquities has helped me erase the pain and inner conflict of a refugee who once felt helpless and now sees a way to make a difference. However, it has also exposed me to a number of new challenges facing refugees and immigrants. Having two passports or nationalities can seem a luxury to many, but it is also loaded with contradictions; we belong everywhere and nowhere. We are different abroad, and we are different at home.

Is this how your book begins?

The book begins on an Easter Saturday in Jerusalem, showing how all Christians worldwide have their representatives (Patriarchs, Archbishops Bishops etc) ready to collect the holy light and bring it back to their faithful in time for the Easter night.  It shows the importance of Cyprus in Christianity but also its links to Judaism.  Saint Barnabas, a Jew born from the Levit family was born in Salamis, and when he heard of Christ he went to meet him and he became a faithful follower and was sent to Antiochia and Cyprus with Saint Paul to spread Christianity.

When did you launch this struggle to repatriate stolen treasures?

I entered the fight against art smugglers in 1987, and it was then I had to learn the rules of their game. I was very fortunate to receive the best legal advice owing to the late Archbishop Chrysostomos I, which meant that before every single battle to regain stolen treasures I was appropriately prepared. And let me tell you – in spite of the mentally and physically exhausting effort, there is nothing more rewarding than the smiles of vindication when a relic is repatriated.

What did your participation in judicial battles teach you?

The things I have learned from this process may change the way we deal with the State and the Church, and can help us turn Cyprus to a strong country, because it’s worth it. The errors I have seen being committed in the Munich case is a microcosm of the issues plaguing Cyprus today – in fact, humanity as a whole. I have learned that danger always lurks among selfish people appointed in businesses and in governmental, political and church circles. In the name of art trafficking, profit brings enemies together into complicity; so does the thirst for power, uniting those who place their own interest above the common good. Common values unite people beyond the borders of their country; conversely, personal interest separates people, even those coming from the same family.

Is such information included in your digitized Archive, now accessible for study?

Yes. My Archive spans 30 years of work towards the repatriation of stolen Cypriot antiquities. It provides a detailed image of the action of art smugglers, of the legal processes for repatriating stolen treasures, as well as information on the handlings of the government and the Church, cases pertaining to the repatriation of works of art that had been stolen from the occupied areas. One may observe the errors committed, who committed them – and mainly to look at specific attitudes that dominate our society and disorientate us from our purpose. By virtue of the Archive and my book, I share my own experience as refugee and immigrant with the whole world.

How relevant is this today?

Very relevant! Today in Europe refugees, immigrants and their integration into the host country are what you call a ‘hot potato’.  The findings are extremely important from an anthropological point of view, especially today when the topic of national identity is at the heart of the political debate in Europe. The question of identity is directly linked to immigration and to policies of social integration. The Archive, just like my book, presents Cyprus as an excellent case-study in terms of the consequences of ethnic and cultural cleansing. They reflect the size of systematic looting, the manner in which criminal gangs operate and how the illegal art trade connects to drug trafficking and money laundering. As we speak, the destruction of Palmyra in Syria by ISIS demonstrates how the protection of cultural heritage should be a priority. It has been perceived as closely linked to human rights such as religious freedom and safety.

How can we create a better tomorrow?

By way of political, ecclesiastical and economic cleansing. A new beginning based on transparency, on values and principles under the motto of “Cyprus and its people first, and then everyone else”. This will be a true claiming strategy, a strategy of responsible and moral economy.

What would moral economy mean to Cyprus?

It would mean giving jobs to our youth first, and then hiring foreigners. It would mean that politicians would treat hydrocarbons as national wealth, applying responsible management for the next generations. Moral economy means that every politician, businessman or civil servant managing public expenditure for their personal benefit will be ousted and brought to justice. It is an economy based on enterprises acting on social responsibility – and a viable enterprise is one based on what it knows and not on the person that knows. We are all born equal but not all of us have the same opportunities. Only those politicians embracing transparency and human rights will bring the right, viable solution to Cyprus.

In the course of claiming Cyprus’ religious treasures, I have had to fight “God’s smugglers”. Unfortunately, I have discovered “God’s smugglers” across all societal strata. On the occasion of the Christmas celebrations, let me remind everyone that we are all born as God’s children.

Walk of Truth offices in Cyprus within 2018

One of my goals is to set up an office in Cyprus for my foundation, Walk of Truth, which is focused on protecting cultural heritage in conflict zones and combatting the illegal trade in cultural artefacts.

Much of the destruction and looting of cultural heritage is happening in the Middle East region – in Syria, Iraq and Libya. Cyprus is ideally located for access to these areas. But beyond that, the island also has a wealth of experience in this field and the lessons learned in Cyprus are applicable to other countries which have faced looting and trafficking more recently. As a hub of civilization with a wealth of ancient sites and antiquities, it has suffered looting by many different powers. Over the past 43 years, Cyprus has endured cultural cleansing at the hands of looters seeking a quick profit; underground dealers who became middlemen in a global illegal trade on behalf of unethical or unknowing collectors who failed to seek information about the provenance of the antiquities they acquired.  We believe Cyprus has the potential to become a centre of expertise in this field.

What do you intend to do practically?

Our aim is to develop training programmes in combatting art trafficking that will bring experts from the Middle East as well as Europe and beyond to Cyprus. The legal framework to recover looted objects – particularly those plundered from conflict zones – is inadequate in jurisdictions worldwide. Cyprus has amassed experience that can be utilized by other countries in the world. This is why I’m transferring my Archive here, eager to teach those with a thirst for learning the language of claiming culture.